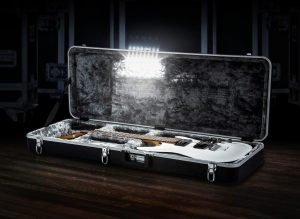 Gator Cases launched its brand new line of LED edition guitar cases at the Summer Namm Festival in Nashville on July 13-15, 2017. This festival boasts thousands of attendees, including representatives from Music Inc. Magazine, which has been named one of the top 10 trade magazines in the nation three times by the American Society of Business Publication Editors. After reviewing the unique design of the LED edition guitar cases from Gator Cases, the representatives of Music Inc. Magazine chose to recognize this line of cases in their Editor’s Choice Award edition magazine.

Senior Director of Marketing and Creative Services for Gator Cases, Mike Swenson, weighed in on the response received by the LED edition guitar cases at Summer Namm. “The LED edition guitar cases were very well received at Summer Namm by the industry at large. We’re honored to be chosen for Music Inc. Magazine’s Editor’s Choice Awards, and we’re thankful for the continued support we’ve received from the industry,” says Swenson.

This new line of LED guitar cases is based on two of the best selling series of guitar cases from Gator Cases — the GTSA and the GC. Both series are constructed with military-grade durability, with the GTSA featuring TSA accepted secure latches. The LED edition of these two series features a LED light embedded in the interior of the lid, positioned to illuminate the guitar and the storage compartment next to the guitar neck. The embedded LED light is the first of it’s kind in guitar cases, and it offers the perfect solution for musicians searching for accessories in the dim light of the side stage or backstage.

A division of Gator Co.